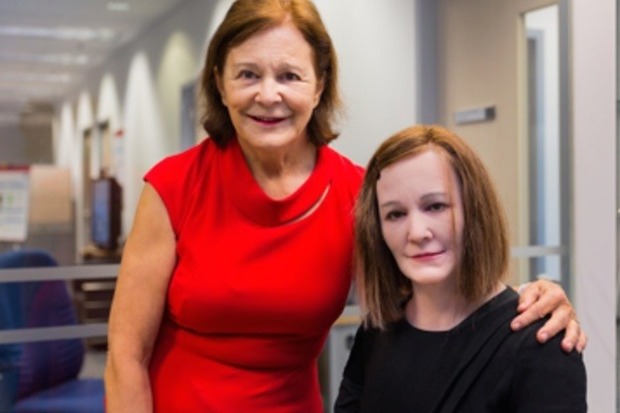 Researchers create robot that could act as a helper for the elderly or assistant in the office.

Scientists have built a robot that will recognize you and remember your name the second time it meets you.

The robot, named Nadine, has something else that makes her stand out from the robotic crowd.

Nadine, according to her creators, has a personality.

Scientists at Nanyang Technological University in Singapore say Nadine was built to have moods and emotions. The robot was programmed to be happy or sad, depending on the conversation.

That means Nadine was built to recognize specific words and phrases — and respond accordingly.

“As countries worldwide face challenges of an aging population, social robots can be one solution to address the shrinking workforce, become personal companions for children and the elderly at home, and even serve as a platform for healthcare services in the future,” said Nadia Thalmann, a professor at Nanyang Technological University and lead researcher on the Nadia project. “This is somewhat like a real companion that is always with you and conscious of what is happening. So in the future, these socially intelligent robots could be like C-3PO, the iconic golden droid from Star Wars, with knowledge of language and etiquette.”

Nadine is still a research project at this point, though the university sees her being marketable in the future, though a specific timeframe wasn’t given.

Thalmann explained that they have been working on this droid for four years, pulling in researchers from engineering, computer science, linguistics and psychology to work alongside roboticists and computer scientists.

Scientists from the different specialties were needed to take robot from a computer program to a human-like machine that can interact with people.

Nadine was built to resemble Thalmann.

Powered by artificial intelligence software similar to Apple’s Siri or Microsoft’s Cortana, the humanoid robot is designed to work as a receptionist, greeting people, shaking hands and looking people in the eye during a conversation.

Scientists around the world have been working to create robots that can act as assistants in the home or workplace.

For instance, Aloft Hotel in California’s Silicon Valley has been using an autonomous robot as a butler, delivering small items to guests rooms all on its own.

And this past October, Toyota reported that its researchers are working on a small robot — one that could actually fit in your vehicle’s cup holder — that could act as a driving companion, keeping people company and alert while they’re on the road.

Ezra Gottheil, an analyst with Technology Business Research, noted that the robotics industry has been working steadily toward humanoid robotics assistants but said he’s not interested in having his own version of Nadine.

“It’s the appearance — making it look semi-human — that is creepy,” said Gottheil. “It’s one thing to be a program that responds to certain words or phrases. It’s another thing to pretend to be human. We’re not anywhere near not being able to tell if a robot is a machine or human. And if we’re not near that, then pretending to be human is bound to be confusing.”