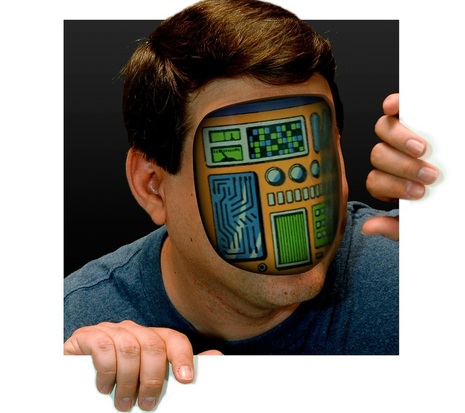 The U.S. military is working to create a chip that can be implanted in a soldier’s brain to connect it directly to computers that can deliver data on an enemy’s position, maps and battle instructions.

The implanted chip would essentially create soldier cyborgs that would be safer and better fighters.

“Today’s best brain-computer interface systems are like two supercomputers trying to talk to each other using an old 300-baud modem,” said Phillip Alvelda, manager for DARPA’s Neural Engineering System Design program. “Imagine what will become possible when we upgrade our tools to really open the channel between the human brain and modern electronics.”

DARPA announced this week that it formed the new program to develop a neural interface — a system working at the intersection of a biological nervous system and a device — that would create “unprecedented signal resolution and data-transfer bandwidth” between the human brain and the digital world.

Think of the neural interface as a translator that would turn digital signals into electrochemical language that the brain can read, and vice versa.

DARPA, the Defense Advanced Research Projects Agency, focuses on emerging technology for the military, wants the neural interface to be no larger than one cubic centimeter, with the volume of two nickels stacked back to back.

There are already some neural interfaces approved for use with humans, but they’ve proven to be imprecise and provide a user with a cacophony of information, more like noise than helpful data. DARPA said it wants to improve the technology so the system that can communicate clearly and individually with any of up to one million neurons in a specific region of the brain.

For years now, industry players have said that mixing biology and machines is going to create the most powerful technology in the future.

More than six years ago, an Intel researcher said that computer chips implanted in people’s brains will control computers – eliminating the need for a keyboard and mouse – by 2020.

And nearly four years ago, researchers at Northwestern University reported that they enabled a paralyzed hand to move by using a device to deliver a message from the brain directly to the necessary muscles.

Just last September, a professor of electrical engineering and computer science at the University of California at Berkeley, told Computerworld that in just 10 years we may have computer sensors in the walls of our house, in our furniture — and in our brains.

The military’s new research project will involve scientists from various fields, including neuroscience, synthetic biology, low-power electronics, photonics, medical device packaging and manufacturing. The scientists will need to work on advanced mathematical and neuro-computation techniques to translate between biological-electromechanical language and digital ones and zeros.

The military is hoping industry players will become partners in the research, offering prototyping and manufacturing services and intellectual property.

To pull researchers and partners together, DARPA is hosting a two-day meeting in Arlington, Va. on Feb. 2-3.